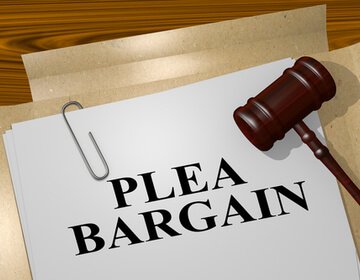 If you’ve been arrested and charged with a crime, you might think that the only path to resolving your case is to go to trial. Many people unfamiliar with the criminal justice system don’t know that many cases never go all the way to trial. Instead, there are other ways to resolve a criminal case, including a plea bargain.

Prosecutors use plea bargains all the time. According to the U.S. Department of Justice roughly 90 to 95 percent of cases involve a plea bargain. The government uses plea bargains so heavily because preparing for and bringing a case to trial takes a significant amount of work and there are no guaranteed outcomes for either side. A plea bargain ensures that prosecutors get the pleas they want without the risk of losing at trial.

If you’re facing a criminal charge, a plea deal could be a critical part of your case. That’s why it’s important to have an experienced and knowledgeable criminal defense lawyer in your corner.

At Kurtz & Blum, we’ve been fighting for the rights of defendants in North Carolina since 1998. We have more than 50 years of combined legal experience. We work strategically, and we always work to give you the quality representation you deserve. We’ll communicate clearly with you, give you straightforward advice, and always look out for you and your best interests.

Learn more about how we can help you. Contact us today for a confidential consultation about your case.

What Is a Plea Bargain?

The phrase, “plea bargain” is one that you may have heard before. But what is a plea agreement, and how could it factor into a criminal case? Let’s take a look.

When someone is charged with a crime, they could be facing fines, prison time, and a criminal record that follows them around for the rest of their lives. Prosecutors may offer lesser charges, dismiss certain charges, or recommend a reduced sentence in exchange for the person pleading guilty. This is known as a “plea bargain,” because prosecutors are offering something in exchange for a guilty plea.

Prosecutors must follow several strict rules about using different types of plea bargains. They cannot charge or threaten a defendant with crimes that aren’t supported by the facts to get defendants to enter a plea bargain. They also can’t threaten defendants by telling them their sentence may be more serious than others if they plead not guilty. If they engage in these activities or other prohibited tactics, they may be violating their duties and the law.

There are potential benefits to a plea bargain. A plea bargain could reduce charges, lower punishments such as fines or jail time, and could save you the time, fees, and uncertainty of a trial. For example, let’s say someone is charged with a felony. Prosecutors may offer a felony plea bargain that could reduce the charge or recommend jail time well below the legal maximum.

Plea bargains don’t always make sense, but prosecutors may offer them anyway. In some cases, prosecutors may have weak evidence and little support for their case. But if they can get someone to accept a plea bargain, they may still get a conviction. That means you may be accepting a guilty plea based on weak or bad evidence. It’s also important to know that by accepting a plea bargain, you are giving up your right to a trial and your opportunity to fight for a “not guilty” verdict.

Prosecutors and the defense usually discuss a potential plea bargain after arraignment or at a pretrial conference. After negotiations, if they can agree on a plea bargain, they’ll need court approval. Once the court has entered and approved the plea deal, the agreement goes into effect.

Is a Plea Bargain Right for You?

Whether a plea bargain is right for you will depend on the facts of your plea bargain case, what prosecutors are offering, and considerations such as whether you have any prior convictions. For example, plea deals for first-time offenders may have options that wouldn’t be available to someone with a criminal record.

Plea bargains can be complicated and can have a lifetime of consequences, so it’s important to understand exactly what a plea bargain could mean for you. If you have questions about whether a plea bargain is right for you, speak with your lawyer about the next steps.

How Kurtz & Blum Can Help

Criminal charges and plea bargains are some of the most serious matters you can face. But you don’t have to do it alone. Our firm is in your corner, and we’re ready to help you when you’re dealing with charges or considering a plea bargain. We are ready to provide:

These are only a few of the important ways that we could help you during the plea bargain process. For more information about how we could help, contact us immediately.

If you’re facing criminal charges or need help with a plea bargain, contact Kurtz & Blum now. We believe that you deserve experienced quality legal representation from the start of your case, and we are here to help. We’re known for delivering honest advice, clear assessments, and outstanding legal support to people during their times of need.

We’re proud of the work we do every day for our clients, and we’re here to talk with you. For a confidential consultation about we can help you, reach out to us now.

“Very Professional. However, I would like to offer one suggestion. It would help if you would call both before and after the court date just to check in. I ended up having to call your firm to find out the final outcome. Thanks.”