Majority of Remaining "Moral Monday" Cases to Be Dismissed 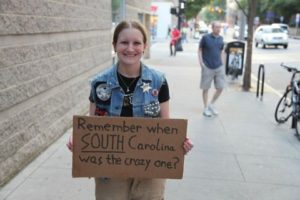 One of my favorite things about living and working in Raleigh is that it tends to be a place where things happen. Raleigh is the capital of North Carolina and Wake County is one of the fastest growing metropolitan areas in the United States, and it seems that not a week goes by without there being something new in town. Because it is also the center of politics in the Old North State, Raleigh residents often have better access to information about legislation and changing regulations. Last summer, Raleigh made headlines across the country and internationally via a series of weekly protests that came to be known as “Moral Mondays.” The Moral Monday protests began in response to actions taken by the N.C. General Assembly and Governor Pat McCrory. The demonstrations, once centered in Raleigh, have spread across the state and have even prompted organizers in Georgia and South Carolina to promote similar protests. Moral Mondays have no single target, and concerns range from teacher pay and unemployment benefits, to issues like women’s healthcare and the repeal of the Racial Justice Act. What the Moral Mondays of the summer of 2013 had in common was engagement in civil disobedience by the protestors.

The protests themselves have continued to be controversial, but the criticism against Moral Mondays was strongest last year. In 2013, conservative groups that disagreed with Moral Mondays collected the mugshots of arrested demonstrators and posted them on a special website. Over the course of the summer of 2013, over 900 demonstrators were arrested inside the North Carolina Legislative Building. Those arrested were charged with second-degree trespassing, failure to disperse on command, and displaying signs or placards in violation of legislative building rules, all of which are misdemeanors. Because these cases all occurred in Raleigh, it fell on the Wake County District Attorney’s Office to prosecute every single one. All of the people charged were offered a deferral agreement – pay $180 in court costs and perform 25 hours of community service, and the charges would be dismissed. Not even two dozen people accepted this offer.

The Moral Monday demonstrators seem to have received help from an unlikely source: the recent U.S. Supreme Court case of McCullen v. Coakley, which was decided in June of this year. In that case, the Court overturned a Massachusetts law creating 35 foot buffer zones for protestors outside of abortion clinics, saying that the attempt to create zones in public spaces where protests were prohibited infringed on the rights of free speech and freedom of assembly. The bulk of the Moral Monday arrests took place while at least one chamber of the N.C. General Assembly was in session, and thus while the Legislative Building was open to the public. After the decision in McCullen, judges began to throw out some of the Moral Monday cases because by arresting those peacefully assembled in a public place, police had placed an unconstitutional burden on the demonstrators.

The right to a trial is one that every criminal defendant is entitled to, but is also exercised on a less frequent basis. An estimated 90-97% of all cases in criminal courts across the nation end in the defendant pleading guilty to some charge. Our modern court systems are designed around the idea of the plea negotiation – without pleas, criminal courts would come screeching to a halt. Most of the individuals arrested on Moral Mondays in 2013 opted to have their cases tried. It has been over a year since the last of the 2013 demonstrators was arrested, and almost 600 cases remain on the active docket in the Wake County court system. This is even after a special courtroom was designated to handle the cases. In part due to the burden that trying all the Moral Monday cases placed on the district courts of Wake County, as well as the strain the appealed cases were causing in superior court, acting District Attorney Ned Mangum announced earlier today that all but about 50 of the active Moral Monday cases would be dismissed. The remaining arrests occurred during periods when the Legislative Building was closed to the public.

More so than any other building in the State of North Carolina, the building that houses the N.C. General Assembly belongs to the people. It exists to promote the interests of every citizen in this state, even the ones who didn’t vote for the current legislators. Not everyone may agree with the sentiments behind Moral Mondays, but surely we must all recognize that the right to peaceably assemble and to seek redress from the government are among the most fundamental rights we have as Americans. I think that Mr. Mangum made the correct decision in choosing to dismiss most of the remaining cases. The saga of Moral Mondays is not yet over, but at least a few hundred brave people will sleep easier knowing that their constitutional rights prevailed.